In our last posting, we spoke about some of the technical concerns underlying the solution that had seemed all too temporal, in the problems of the Euro.

Today we hear that the Greek government, on whose behalf the Prime Minister had accepted the deal, may itself be close to failure. Apparently, the Greek Finance Minister has now changed his position on the suggested referendum, recently put forward by the Prime Minister. This referendum was proposed, one feels, as a matter of conscience on the part of the PM, in light of the austerity it would continue to impose on the Greek people.

Given that inevitably that question has to boil down to one of principle: should Greece be in the Euro or not? The PM is, at time of writing, looking like he may not survive the vote on whether to proceed with the referendum. The leaders of the Eurozone, notably France and Germany are stating that the first tranche of bail out funds will now not be paid, leading to effective default on the part of Greece, increasingly unable to pay its debts.

Some thinkers have now begun to rationalise what many of us have been saying all along – that the Eurozone will be little worse off without the Greeks. No bail out fund until a decision on the referendum, and if the answer is the wrong one, then no bail out fund period: Greece will default more legitimately than this slow strangulation, and return to the Drachma.

With the loss of its weakest member, the Eurozone could consolidate and strengthen…or unwind completely. We are at the end of the beginning, but of exactly what, remains to be seen…

We are torn by the recent images of Muammar Gaddafi’s death. Perhaps we might not feel this, were we Libyan, and had first hand experiences of the horrors Gaddafi exercised on his all too suspecting citizenry. Yet…we are not Libyan; thankfully we have no direct knowledge of his megalomania, his methods of torture and international duplicity.

So we default to behaviour that has stood us in good stead for a long time: decorum, decency, privacy and sensitivity. In these times of instant media (which is almost wholly a good development), images can race around the planet in literally seconds – and can be broadcast, taken from an individual’s ownership, on national media only seconds later. This does not make it right.

There is a privacy in the death of another that we would do well to remember, whatever their crime. Are we not haunted enough by the images of Ceauşescu and his wife, seconds after their execution by firing squad? Did no stirrings of humanity reveal themselves in us, as we witnessed Saddam’s medical examination, knowing full well he was heading to a State Trial from which he would not return. Perhaps the latter was justified…The images of the killing of Gaddafi are amongst the most brutal and shocking ever shown on western media. Their publication has not been without controversy: both the BBC and the UK national press have had bulletin boards with hundreds of complaints. There is a widespread feeling of uncertainty: we wanted him removed, we sanctioned our representatives to achieve this end – we didn’t expect to see the result broadcast around the world, of a terrified, ashen old man covered in blood, seconds before his death. In the internet world of instant publicity, let us not abandon our ability to be shocked, even from those who deserve no pity from us.

In all that is in the name of Holy – how can one justify the calculated murder of 84 people? The deliberate targeting of young, idealistic innocents? To pick people off, with a rifle – when they are not the enemy, they are not armed, they are not engaged in the war you believe you are fighting – all this beggars belief, and suspends our view in the God given hope that all mankind holds dear.

Norway is a peaceful society, for many years seen as the model of an idealised, albeit State heavy, society. One that ranks highest in the UN’s Human Development Index. One cited as a model for many others to follow.

These killings show again clearly that killing in the name of God are nothing other than murder and in this case on an industrialised scale. Fundamentalism, in any guise, is the sanctuary of the deluded. It is left to the families mourning their loss, and the society searching its conscience, to make sense of this murderous act.

And no spoke and no one smiled.

There were too many spaces in the line” 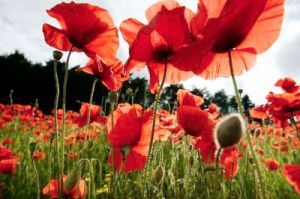 Yesterday was our National  Remembrance Day in the UK, and we attended services in the morning. Our Vicar is an impassioned and resolute intellectual, with true warmth and compassion towards the subject. Also, in his case, experience, as a former Naval Chaplain.

Damian Merciar too has several years’ personal experience of the Forces, and, like most families of this country, experience of the losses from both conflicts. His Great Grandfather was one of the tens of thousands killed in the early days of the Somme, and his Grandfather a veteran  of the Royal Artillery Regiment, wounded in action in occupied France – after doubling up as a paratrooper.

This was precisely the point about the Sermon delivered yesterday – that it is only with personal experience that we are able to honour what is meant by Remembrance. This is distinct from a call for Peace. A separate and necessary time for reflection, mourning and a possible tempering of the will towards not letting this happen again. Mankind is a violent animal, and the latter point is uttered as much in hope as anything else. See Rwanda, Darfur, recent (and historical) Balkans’ implosions – let alone what passes for ‘calming’ measures in both Afghanistan and Iraq.

Pain is a universal leveller; there are economic, societal, psychological and emotional losses to be borne as a result. Remembrance is a necessary balm.

This week was a bit hectic to say the least…On Monday we met both William Hague and Carl Bildt, the Shadow Foreign Secretary and former leader of the Conservative Party, and former Prime Minister of Sweden, respectively.

I used the opportunity to quiz the Rt Hon Mr Hague about representation of different demographics in the UK Parliament – notably UK Asians. I am Anglo-Asian, and I’ve always felt strongly about seeing greater representation of a naturally conservative group of people, in the House of Commons…. The seminar in which this meeting took place was to review the Conservative Party’s approach to security and energy issues, and was a very fruitful day.

Later in the week, we presented a rationale for the adoption of Triple Play entertainment and communication services, through the medium of a mobile telecommunications network – a relatively novel idea! Interesting – we must await the outcome!